The state-of-the-art case of ETRA Spa
Odours in Bassano del Grappa: from protest to consent

In Bassano del Grappa (in the province of Vicenza) the olfactory impact was effectively dealt with and reduced in a waste treatment plant that had received complaints from local residents.

The Waste hub of Bassano

The multi-purpose waste treatment centre in Bassano is managed by the state-owned multi-utility company ETRA Spa and is located in a large area covering several municipalities and provinces.
The anaerobic digestion system (3 digesters) produces biogas for energy conversion and has an annexed composting plant. The complex also includes: dry waste pre-treatment processes, an inter-municipal collection centre, provisional separation and storage of recyclable, special and hazardous waste, and a end-of-life waste landfill.

The centre is located in the industrial area bordering the residential district Prè, and over time has been the subject of strong criticism by local residents due to nuisance odours . 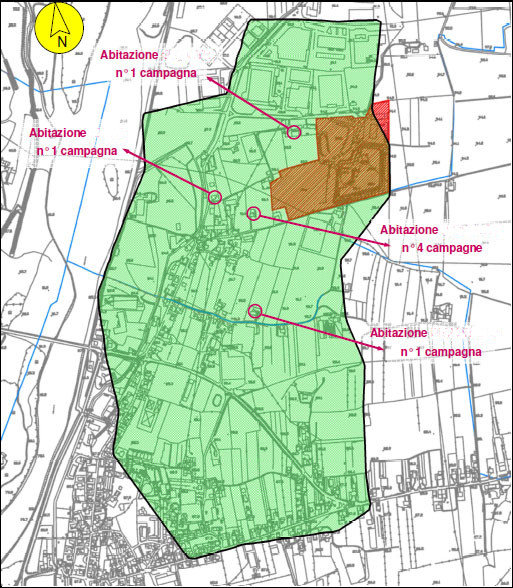 To deal with increasing hostility, a round table was set up a number of years ago, with all parties concerned: the manager of the ETRA Spa plant, the municipal authorities of Bassano del Grappa and Cartigliano, and the local residents Committee. This body drew up an Operating Plan to reduce the olfactory impact to within a threshold of acceptability.

In order to identify the required interventions, the Plan established the need for odour measurements to obtain an objective representation of the olfactory impact in the area.

Osmotech was selected as the laboratory qualified to perform these measurements, and in particular to:

The odour sources in the waste centre are manifold and vary greatly in type: conveyed, air diffused, and occasional/fugitive typical of processes performed in this location. They are characterised by the presence of ammonia, volatile organic compounds, hydrogen sulphide, mercaptans and other compounds with low odour thresholds (in other words perceptible even in minimal concentrations).

To define the emission framework of the plant, a sampling and analysis protocol was conducted of the various odour sources according to the standards UNI CEI EN ISO/IEC 17025:2005 and UNI EN 13725:2004 (for which Osmotech is accredited by ACCREDIA, with certificate no. 1408).

This was followed by an assessment of the effects on the surrounding area in terms of spatial extent, frequency of occurrence and type of odour.

At the same time as the olfatometric analyses, the samples taken also underwent chemical analyses in which the hazard of toxicity for public health and the environment was excluded.

OFI is the most suitable and reliable for the detection of odours as it is based on human smell, which is highly sophisticated and superior to any other technical instrument in the perception and distinction of odour molecules, even in infinitesimal concentrations.

OFI consists in conducting field inspections with human panels recruited and trained to recognise odours, recording the measurements (presence and intensity of odour) at set times, locations and routes.
Performed using the grid method, this technique enables a reliable statistical estimate of the coverage and frequency of odours around a plant within a set period of time.

The recruitment and training of assessors is a key factor. In Bassano the assessors were recruited from local residents – excluding the observation area – and underwent sensory tests to select the “noses” with average olfactory sensitivity as required by standards. Qualified Osmotech personnel then trained them to recognise typical odours of the plant and to take measurements correctly.

The first inspection was conducted in the second semester of  2009. The inspection area was defined according to a meteorological study of the area, the location of sensitive receptors and nuisance reports recorded in the previous period.
The Field Inspection grid covered approximately 2 square kilometres, divided into 33 cells of with sides of around 200 metres.
The 4 corners of each cell were the odour measurement points, reached by the panellists on pre-set routes (rounds).

The number of assessments performed for each corner is decisive for the reliability and validity of the inspection and must be statistically consistent and varied, working in different weather and seasonal conditions, at different times of the day or night, and with different assessors.
At each measurement point in Bassano, the panellists stayed for 10 minutes, smelling the air every 10 seconds, recording each smell perceived and thus noting 60 measurements for each inspection point.

The data processed for each cell and for each odour  source were plotted on a map. The images show, for example, the data of average frequency of the “biofilter” odour for each of the grid cells (left) and the corresponding spatial representation of the olfactory impact with isofrequency curves (right). 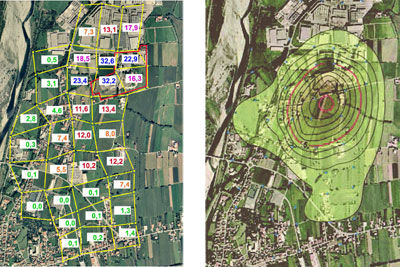 In 2011 and the following years, the OFI was repeated, ascertaining the progressive reduction of the extent of the olfactory impact, thanks to the improvements introduced.
The following map shows the positive results achieved over time: from 2009 (magenta curve) to 2011 (black), 2014 (green) and 2015 (blue). A comparison of the time periods is made with an isopleth of 5%: this value indicates the frequency of odour perception and is set as the threshold of “acceptability”. 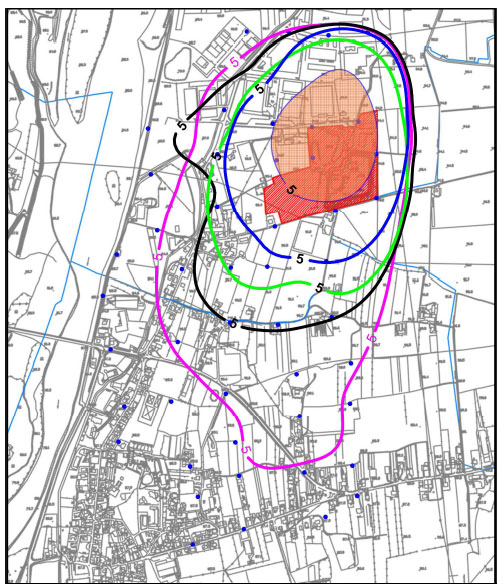 In the case of the Bassano waste centre, the Field Inspection, integrated with monitoring using AOT, enabled the achievement of objectives otherwise unattainable: